Auger Artwork Studios is pleased to offer a study aid for memorizing the United States and Capitals. Packaged as a deck of 50 flash cards, the unusual study aid features whimsical illustrations that help trigger the memory of those of us who have an easier time remembering pictures rather then words. For example, on one of the cards has a picture of a toe peeking out of a can. The back of the card reads: "Topeka, Kansas". While left brained people may be scratching their heads, right brained people can easily remember the odd drawing when asked later what the capital of Kansas is.

A right brained learner himself, Washington DC area artist Michael Auger created a silly picture for each of the 50 states when he was required to memorize them as a child. He decided that what worked for him may work for others and after testing his study aid at various schools he discovered he was right. "Most teaching methods and tests are geared toward the left brained," Auger explains "and this makes it a struggle for those who are right brained to keep up, but it doesn't have to be this way. The picture association method my flash cards use is an alternative way to memorize that can help level the playing field." Right brained learners have called his cards "an absolute lifesaver" and even left brained learners commented it made memorizing more fun.

For any questions regarding your order please 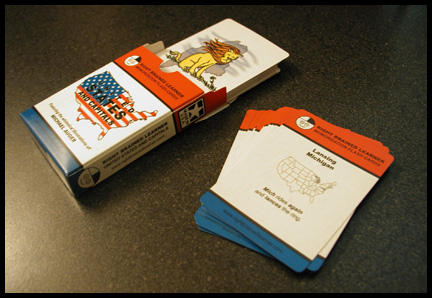 Brought to you by: Auger Artwork Studios

While sitting at your desk, lift your right foot off the floor and make clockwise circles. Now, while doing this, draw the number "6" in the air with your right hand. Your foot will change direction and there's nothing you can do about it.

Have you ever considered that your learning style may be the reason for your success or failure? Do you know how you learn? We know that we use our brains to learn, but how often do we think about how the brain learns? In keeping with the uniqueness of each individual, the brain of each person is also unique. Each of us has our own peculiar way of taking in ideas, sights, and sounds, reprocessing the information received in a highly individualized fashion.

Brain research seems to be in agreement that there are areas in the brain devoted to different tasks. The analytical and logical tasks appear to be undertaken in a part of the brain that is towards the left, and the visual emotional tasks conducted in an area towards the right of the brain, and varying tasks call on different parts of the brain.

In general terms there are three main types of learners. One type favors the logical and analytical part of the brain, or the left side, and another favors the emotional and visual or the right brain whereas the third group accesses both sides of the brain equally. People who generally do well in school tend to favor the logical analytical part of the brain. Schools are designed for this type of thinking. Logical sequential learning is presented in an orderly prescribed manner. This mode of thinking is ideally suited to scholastic success. It was this mode of thinking that designed schools and curricula, and provided a firm basis for the linear, sequential, time dependent world in which we live. The teaching profession generally attracts the kind of people who think in this way. They had no difficulty at school themselves. They learned easily and in the manner demanded by the institution, and given their past success, they naturally believe in the process by which they acquired knowledge. It worked for them so why not repeat a good thing?

The majority of students appear to function well within this type of structured environment. They are comfortable with spelling lists divorced from context. They are able to learn times tables without difficulty and as a result may shine in mathematics in their early school years. They accept scientific method and find that lab reports are easy to write. Logical analytical learners learn within the confines of language and are controlled by it. They are able to listen, analyze and absorb what they hear. They think in words. Sentence structure dictates order and subsequent meaning. 'The man ate the shark' is very different in meaning to 'The shark ate the man'. To be able to learn in this manner enables one to be successful in many academic tests. With achievement comes confidence and that is the controlling factor in future success or failure. These successful students build on their confidence and, in turn, carry this mode of thinking into the work environment. They provide the stability and organization essential to business.

The second group are those who favor their visual memory for learning. They learn differently and tend to think in pictures, using the part of the brain that is emotional and creative. For these people traditional schooling is frequently a minefield and the world of work sheer drudgery. They do not think in words and are not governed by sentence structure. They 'see' the problem or information just as Einstein did. The picture in the mind does not dictate order. In contrast to the organization essential to produce the sentence 'The shark ate the man', their pictures will show exactly who is eating whom and the sequencing of the information is of no importance. Because of the random order of picture creation, these learners do not usually develop good sequencing and organizational skills. As children they often encounter difficulty in counting, order of days of the week, months of the year and time, and as adults they may have difficulty filing information, keeping their desks organized and generally meeting the organizational aspects of their jobs. The acquisition of sequence is not automatic for the visual thinker. It usually has to be learned. In contrast to the auditory learner, the visual learner often encounters difficulty in school. Their random picture creation, lack of sequencing skill and poor verbal comprehension are handicaps in a language, word based, logical and time ordered system. School sometimes becomes a frightening place where there is constant insecurity and the visual learner is at a huge disadvantage.

However, among these visual learners are many of our truly brilliant people. They use their vivid imaginations to solve problems, provide alternatives and generate new ideas and ways of doing things. Although the details may escape them, their ability to visualize offers them the opportunity to see 'the big picture'. Many outstanding leaders are among the ranks of those who did not shine scholastically but were able to use their ability in the world of work.

The third group of learners appears to access both sides of the brain equally. They are able to meet the demands of school and emerge from their scholastic years without the stress and loss of confidence that often surrounds the highly visual learner. They have no difficulty with order and sequence, logic poses no problems, and they can harness their visual memory. In the workplace they can both organize and make decisions. Their right brained thinking encourages flexibility of thought, and their left brained thinking provides the logic to enable them to succeed in a left brained world. They can use the logical sequential system presented at school and supplement it from their imaginations.

So how do you think and in what ways has your thinking governed your life? Your own favored learning style will probably fit one of the three categories described. If you know your learning style is visual then you can develop it further by practicing different visualizing methods. If you know how you learn best, then ensure that you use your strengths and not your weaknesses. The world is changing rapidly and the training of the past does not meet the requirements of the future. Last decade's high school drop-out may be this decade's high achiever. In the new technology industries the experts are often extremely right brained, specialized, and often untrained thinkers who revel in the seemingly chaotic situation. To enable the new type of achievers to reach their potential, the organized sequential word thinkers are also essential. Truly successful creative or artistic people need the support of the organized and logical and the latter require the ideas and flexibility of the former.

We all begin formal learning at school and the traditional school model suits the way some brains work but for others, their way of thinking excludes them from the success they are capable of achieving. The visual learner, who favors the right brain often encounters problems when faced with logical, analytical, sequential tasks or explanations. Einstein did poorly at school and so did Richard Branson. These individuals, whose fine minds thought in pictures, found school too difficult. The complexity of the future we all face requires that all our different learning styles need accommodation, and the more we know about how we learn, the more likely we are to achieve success.

BA, B.Ed, M.Ed is an educational consultant who specializes in providing help and support for individuals with learning difficulties. This includes diagnoses such as dyslexia, dyscalculia and Asperger's syndrome. She divides her time between Singapore and Kuala Lumpur. In Kuala Lumpur she has her own private practice, where she works with clients, consults with families, schools and industry and from which she travels internationally giving workshops. Hilary's goal is to help individuals, corporations, parents and educators work with 'different learners' and appreciate how social and cognitive difficulties are an integral part of work, academic life and social experience.